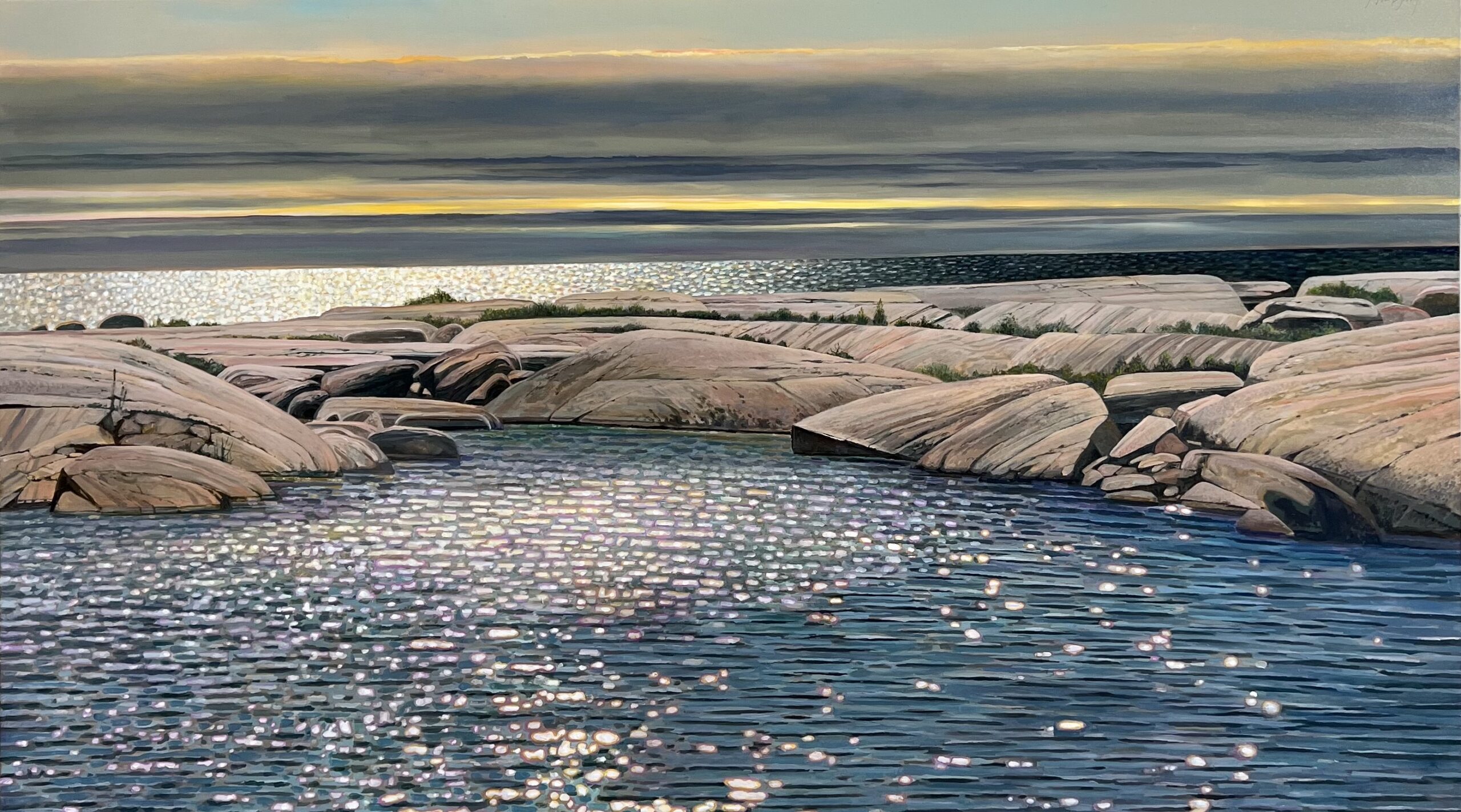 The hits keep on coming. New lows were made across the board in April and are continuing this month. The S&P 500 was the worst performing index we actively manage allocations to, down almost 9%. 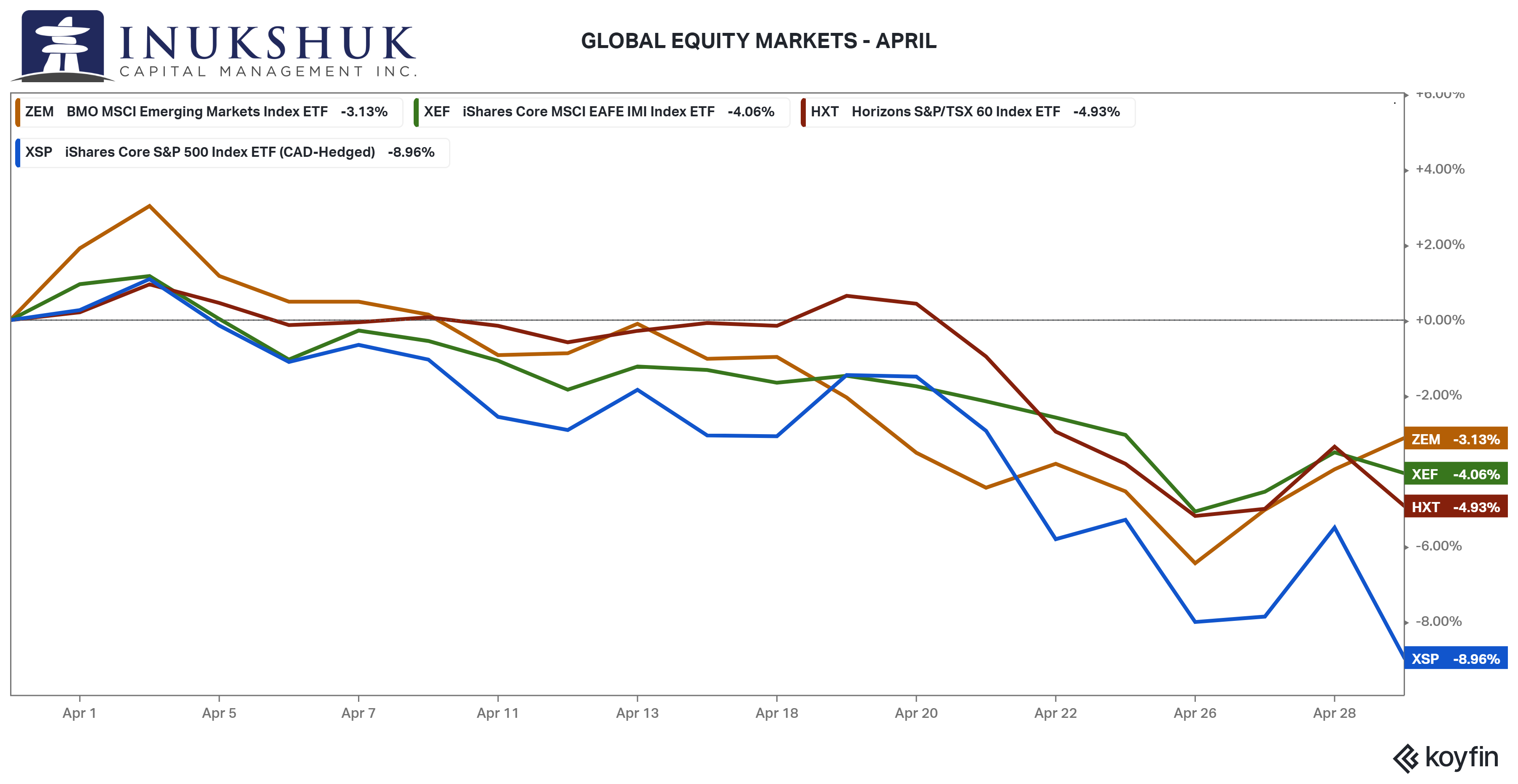 The S&P/TSX 60, the holdout until the beginning of April by refusing to join the losers, is now down on the year. We have paired back our position in the S&P 500 and the S&P/TSX 60 and remain flat EAFE (Europe, Australasia and Far East) and Emerging Markets.

In February, we wrote about sectors. Sectors of the market of stocks are defined by what the underlying corporations actually do. In the U.S., the organization of sectors was formalized by MSCI in the late 90s. There are 11 of them. Every company in the S&P 500 index is assigned to a sector. And every sector has an ETF that is benchmarked to it. A few months ago, the only sectors that were in positive territory were energy and financials. Now, there is only one – energy. 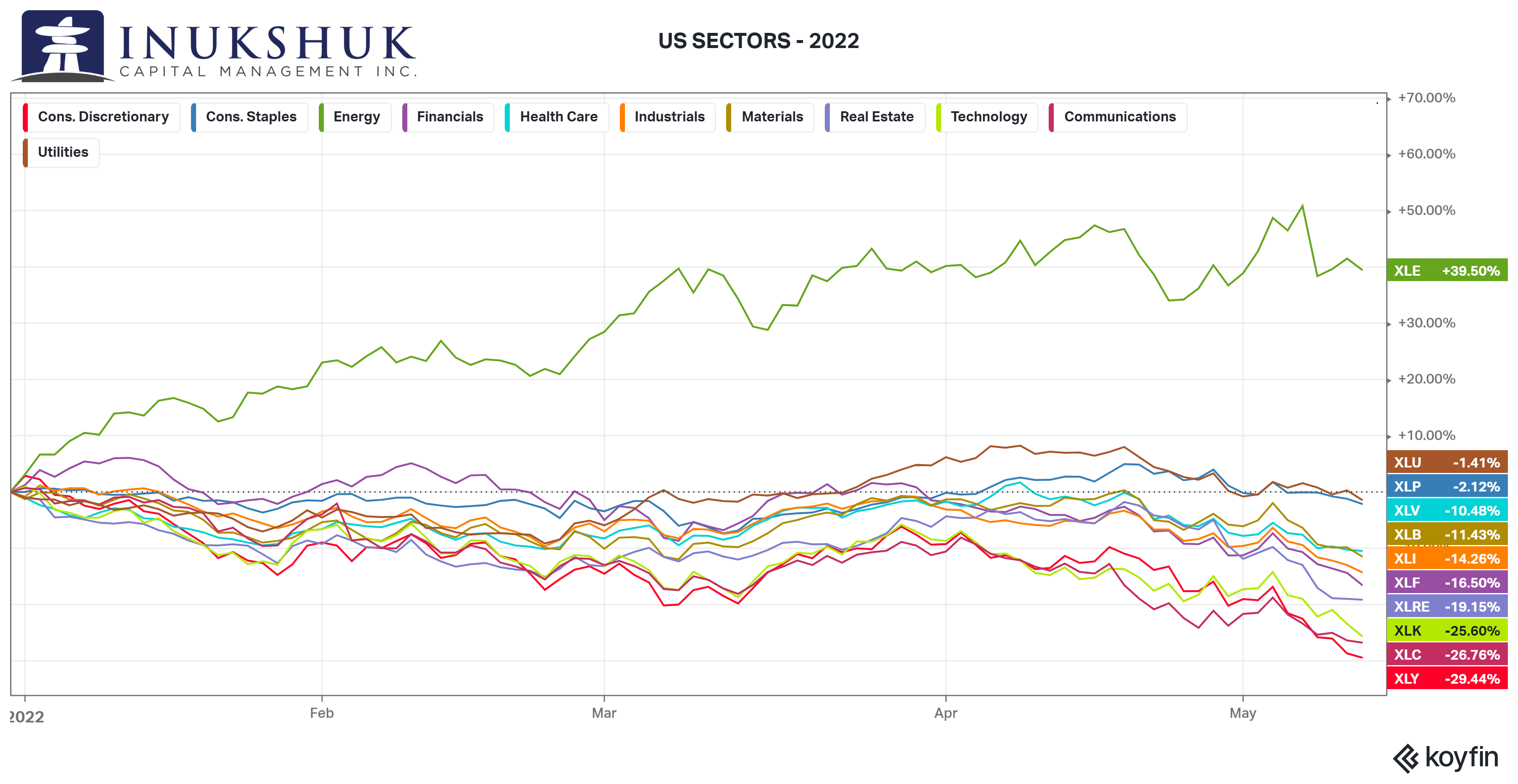 These two charts show that geographic diversification has not contributed much in terms of capital preservation and neither has diversification across sectors. In this case, investing in the S&P 500 – which is comprised of all 11 of the sectors – has, at the lows of last week, produced an 18% loss year-to-date.

HOW BAD IS IT

Canadian investors have been somewhat shielded from the carnage going on elsewhere. And to a certain extent, diversification across sectors has worked due to the composition of large capitalization indexes like the S&P/TSX60, which is more than 50% financials and energy. That has softened the blow of owning one of its worst performing constituents, Shopify Inc., now down 74% on the year.

So, let’s look at the worst performing broad index in North America, the Nasdaq Composite, down roughly 27%, as of this writing. Going back to 1971, there have been 12 peak-to-trough moves (drawdowns) of more than 20%. The current drawdown started from the all-time high of November 22, last year and ranks 7th or 8th depending on when you run the numbers. The prior worst performance was the brutal move that started in the summer of 1998, which bottomed out in October of that year, down 29%. That lasted 79 calendar days and is barely noticeable when you look at a long-term chart. It turns out it was a mere hiccup before a 360% rally that ended in March 2000. 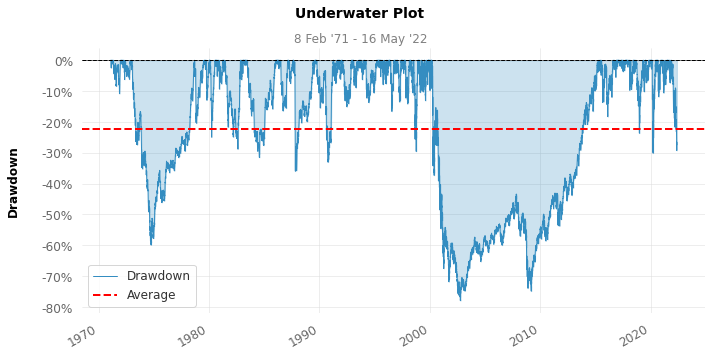 So far, this drawdown has lasted 171 days. We use calendar days because you can feel it even when the market is not open. If we compare the length of time it took to get to the lows of the ‘top-12’, this is the 6th longest, on record. And of those six, this has been the fastest to the lows, averaging negative 17 basis points per day. Interestingly, 1998 and 2020 are the closest in drawdown to today than any other instances, and they are both in the top five of the shortest time until the low.   They also rank as the top two for the shortest amount of time to recover back to the previous highs at 50 and 77 days, respectively. The next closest was 1981-1982 at 83 days, but in that case, it took 483 days to fall 29%. The point is: there doesn’t seem to be a strong correlation between the speed of a decline and the time to recover. Of the top 12, only three of the recovery times were less than the number of days to the low. The odds seem to indicate that if the Nasdaq Composite holds these levels, it will take at least another 171 days to recover.

There’s another way to look at drawdowns in an historical context. How has the year started for the S&P 500 compared to other years? Glad you asked. At last week’s lows, it was down 18%. That is not good. Going back to 1950, this is the worst start to a year since 1970.

Readers may have heard the ‘talking heads’ referring to stagflation as describing the current economic environment. The word stagflation was coined in 1965. Note: six of the 10 worst starts to the year were in the 1960s and 1970s.

There are some clues in looking at the relationship between bad starts to a year and how the market recovered. Out of the nine previous selloffs, three had subsequent rallies, two went pretty much nowhere and four continued to decline.

In the final column, you can see what the net result was for the entire year. Those numbers are less than inspiring.

The benefit of investing across asset classes is one kind of diversification that has been studied and promoted for a very long time. But it can fail, over certain timeframes, just like any approach to investing. Asset allocation is probably the strongest factor in determining return outcomes. But it is also possible to add another diversifier and that is strategy.

Buy-and-hold is a strategy. What we do in our active asset allocation strategy is a rules-based system that is designed to truncate losses. It is complementary to a buy-and-hold strategy, which is another name for long-term trend-following, but with no risk management. Here is a sample of the performance of some of the ETFs that are in our client portfolios. 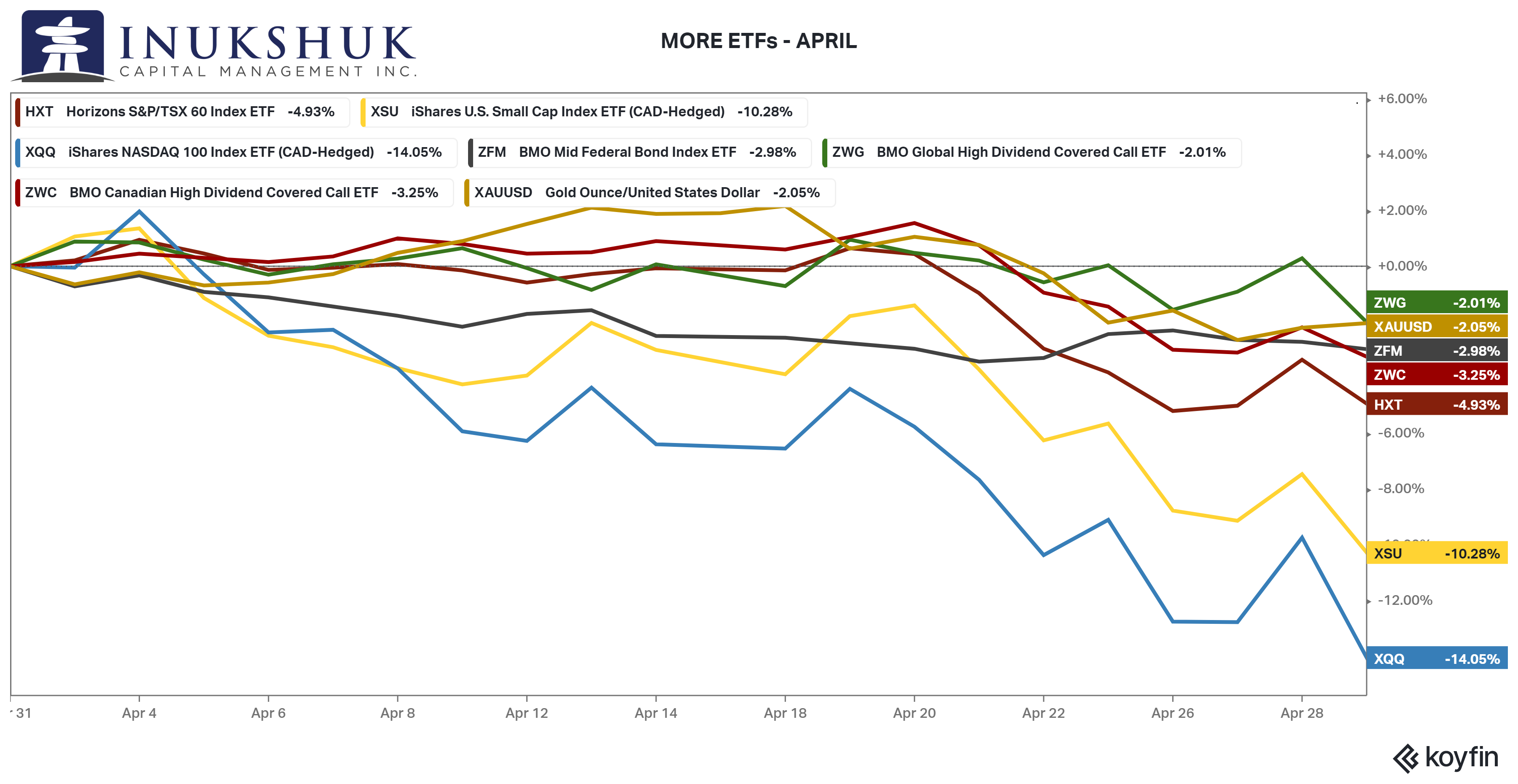 The top performers last month were covered-call ETFs, gold and medium-term Canadian government bonds. The best ‘performer’ lost 2%. The point being: asset class diversification helped to mitigate losses, but another strategy helped as well – earning capital gains cash flow from writing calls on some of the largest companies in North America and the world, while at the same time collecting dividends. BMO’s Canadian High Dividend Covered Call ETF, ZWC, for example, holds many of the same stocks as the S&P/TSX60 ETF we invest in via Horizons HXT. That ability to utilize a different strategy within the same universe of Canadian large capitalization dividend-paying stocks improved relative returns by more than 1.5% in April.

WHAT WE HAVE LEARNED

Each portfolio manager at ICM has approximately 30 years of professional experience. We have all held many roles and responsibilities over those years, across all asset classes. We’ve experienced a variety of challenging market conditions. We are not alone in, or new to, navigating tricky environments, on behalf of our clients.

In the 1960s and 70s, we were busy skinning our knees playing sports, falling off bikes and crashing on ski hills. We didn’t know anything about an investment world where nothing goes up regardless of how hard you are trying to find the right things to invest in. But through that process, as kids learning to play and then in the real world as we got older, we have learned many things.

Here are some of those things.

Here’s how the math of loss works.  If your portfolio drops 25%, it must re-gain 33% to get back to even.  A drop of 50% requires an eye-popping 100% gain to get back to the starting point.  This happens. Warren Buffet himself has jokingly apologized for losing 50% of his investor’s money, twice, since 2000.

Because we understand the math of loss, we focus on achieving our clients’ return objectives while actively managing their downside risk.  We provide an answer to investors who ask, what’s our plan for a bear market?

No one can predict the future consistently. The odds of selecting a stock picking fund manager to outperform their major market benchmark over a 10-year period are extremely low – about 7% according to the S&P Dow Jones Indices LLC.

Road rash will happen, wheels will be bent, and bruises will occur when investing. It’s part of the process. We can’t predict the future. That’s as truthful as it comes in this business.  But we can manage the risk that comes with it.  We believe our disciplined approach is the right one, especially given times like this.

In memory of the wonderful Taylor Hawkins of the Foo Fighters:

It’s times like these you learn to live again

It’s times like these you give and give again

It’s times like these you learn to love again

It’s times like these time and time again
I, I’m a new day rising

To hang the stars upon tonight

I am a little divided

Do I stay or run away

And leave it all behind?

Should you count calories, macros, or both?

If the goal is weight loss, the priority is calories. In other words, to lose fat, you need to watch what you eat.

Let’s do it with the goal of simplicity, so that we can sustain it.

Calorie counting and macro counting: both work but are laborious and eventually people just stop.

“If you can’t sustain it, you won’t maintain it!”

When counting calories and/or macros, food must be measured and weighed for best results. Though true, this is still not 100% accurate.

In my experience with clients, they eventually start estimating, making it even less accurate

My go-to for portion size is the “hand method”, developed by Precision Nutrition (PN).

PN internal research shows that this method is 95% as accurate as weighing, measuring, and tracking your food, but takes way less effort. Plus, you can also use this approach anywhere you go!

Everything boils down to consistency and sustainability, and while the hand method is still an estimate, it will keep you consistent and on track because it is fast.

Here is my go-to green shake, that just happens to be balanced:

‘To sustain it, you must maintain it’
Victoria Bannister
ICM Health Ambassador
Have a question?  Contact us here.