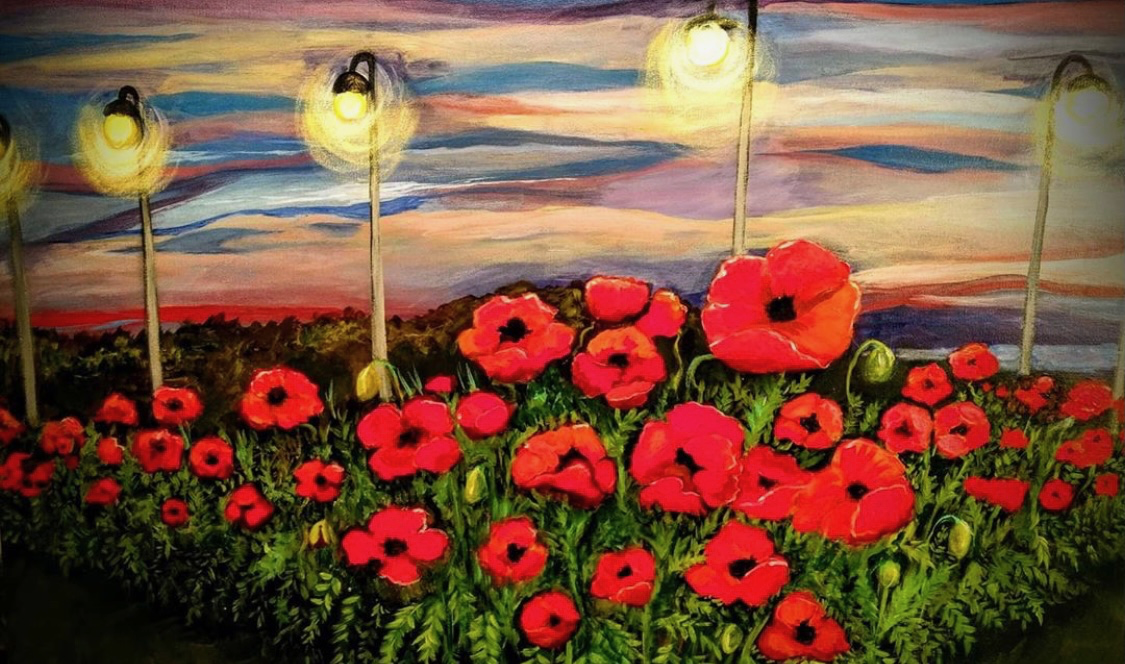 October was a bit like September in that it started out with some promise and ended with a whimper. Sort of like the first quarter of the year, but that was more like despair. The losses from September were erased in the first week or so.  Unfortunately, the gains didn’t hold in Canada, the US or MSCI EAFE. The only global equity index that produced a positive return was Emerging Markets (EM). We started the month with a small position in EM and added to that in the first few weeks of October to bring the allocation to 80% of the maximum.

November is starting out like the prior two months. In the first trading sessions the losses of October have been reversed and in the case of the S&P 500, as of Monday the 9th, making all-time highs. Could we be in repeat mode – is this just a loop we might be stuck in for a while or can the market maintain these levels?

We like to visualize markets by comparing different instances or timeframes with each other. We don’t use these analogues to make investment decisions, but it’s always interesting to compare price behaviour in order to learn something about what the market is doing. Sometimes history repeats, sometimes it rhymes and other times it does neither. Here is a chart of the last two months and where we stand now, after the US election. 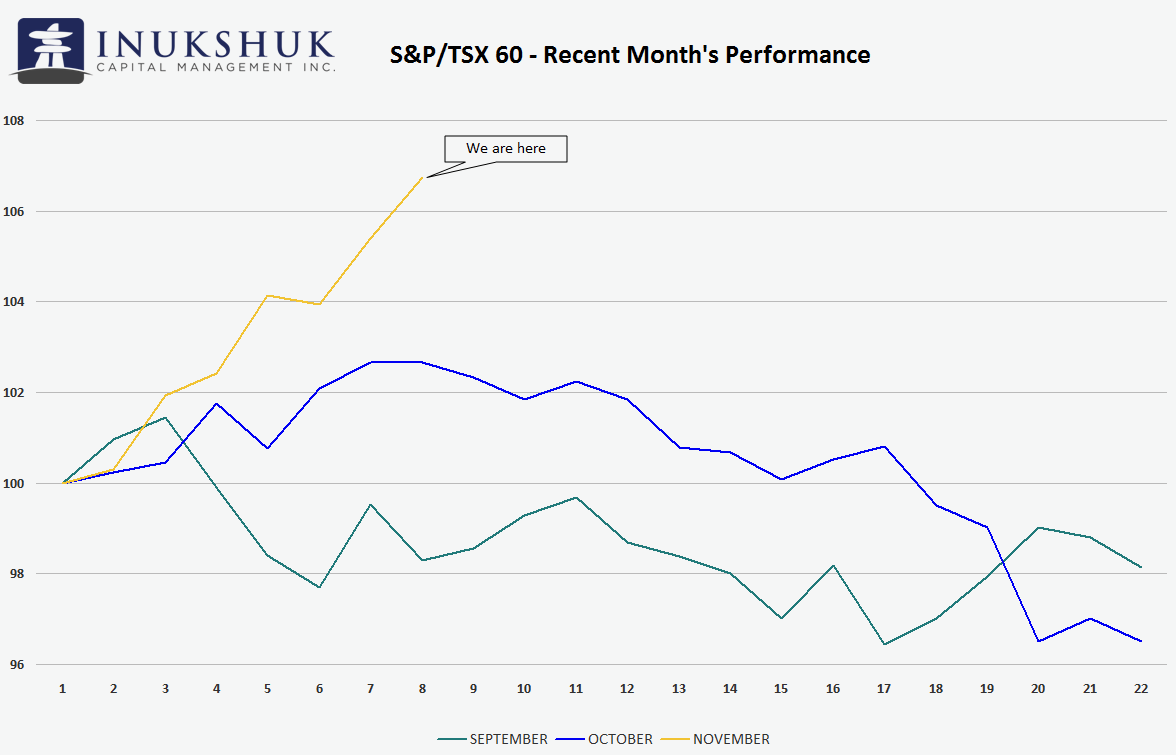 ICM’s systematic strategies use historical price data to determine the strength of trends. They don’t predict outcomes. They learn from the past in order to generate favourable risk-reward investment opportunities. Over our careers we have learned that rules-based investment strategies, combined with other quantitative portfolio construction techniques, improve returns for the amount of risk taken.

As of now, those signals combine across the S&P 500, TSX and EM indexes to a total of 50% of our maximum allocation to active strategies. MSCI EAFE is roughly flat on the year, which is equal to our current position in it. Our systems are flashing yellow for these markets and we are comfortable with that.

SAD THINGS FOR ONE THOUSAND, ALEX

2020 has been very complicated and unsettling for many people in all ways. There is always something to learn from adversity, so in that spirit let’s try and take a few pointers from some of the unique and iconic people who have recently shuffled off this mortal coil.

Alex Trebek
The man who made a ‘game show’ into an intellectual challenge is unique in almost all of popular television. He was a Canadian kid who made it big in Hollywood by never compromising his standards of excellence. Serious intellectuals from all over strive to succeed on Jeopardy. It requires knowledge, skill and a good grasp of risk-reward in betting strategies to win. This was all guided by the seemingly all-knowing Trebek, a man almost no one has anything bad to say about – except for the Sean Connery character on Saturday Night Live’s version of Jeopardy (which, if you haven’t seen and like a good laugh you should search on YouTube)

The things that resonate are the consistency in his approach, patient demeanour along with his love of games and puzzles. The markets are a puzzle we try to solve but are not solvable in the sense of a Jeopardy question. We love what we do. It’s always challenging. We hope our clients feel some comfort in the way we approach things, just as they might in hanging out with Alex Trebek for half an hour of Jeopardy.

The classic James Bond, he became synonymous with the fictional 007. There is always a fun debate about who was, or is, the best James Bond, but the tie goes to longevity (Daniel Craig being the other). Why would this son of a cleaning lady and truck driver, an ex-weightlifter turned actor, have any relevance to us as investment managers? He was James Bond – the man who could solve all problems regardless of the odds and save the world. Who wouldn’t want to aspire to that?

But more seriously, this was a man who changed the way the world looked at fictional action heroes, who could play the character effortlessly and even do his own stunts. He created his own career and kept going. Plus, he stopped the world from the potential economic devastation of Auric Goldfinger’s plans to destroy the Fort Knox depository of gold.

Ok, that wasn’t serious, but to stretch a metaphor we are now living in a world where the US money manufacturers at the Federal Reserve are proceeding to flood the world with US dollars. So Bond(s) and gold are one of our core ideas. Get it?

Whether you like Van Halen’s version of rock’n’roll is not important in order to appreciate the things Eddie accomplished. The son of a Dutch jazz musician dad and an Indonesian mom, who moved to California in the 60’s, he did things in ways nobody did before and that today’s guitarists are still trying to figure out. He was an iconic rockstar. But that only happened because he spent all of his time practicing and innovating. His guitar, known as the Frankenstrat (Strat being short for the Fender Stratocaster, an icon itself) is on display at the Smithsonian in Washington. Its name evolved because he modified everything with parts from other guitars, his own paint, wiring, wax, tape and whatever worked to make it sound the way he wanted it to. He has several patents granted for guitar component innovations.

Without being painful in the association, Inukshuk has a little bit of Eddie-like similarities. Not the rockstar part, but it took a lot of practice to develop the systems we work with and they are unique. Eddie was a trailblazer and we aspire to that. ICM has innovated proprietary systems to guide our investment process. It may be a little less exciting than a classic Eddie facemelter but we think it’s pretty cool.

Depending on your age you will remember Howie in various ways. Some will recall his Hockey Night in Canada broadcasts and his show where he coached young aspiring hockey players on the importance of hard work and fundamentals. He was ahead of his time. Also, some fun facts via Stephen Smith’s Puckstruck blog:

Howie Meeker’s Hockey Basics (1973) was influential enough to have been the only hockey-minded volume to be included in The Literary Review of Canada’s 2006 listing of Canada’s all-time Most Important Books. The author himself professed some shock that his modest 1973 paperback was mingling in the company of Margaret Atwood, Stephen Leacock, Jacques Cartier, and Lucy Maud Montgomery. “You’re kidding,” Meeker said when he heard the news. “That’s sensational.”

So what can we learn from Howie, other than grit, determination and sincerity?
Just like all the others: the similarities are consistent.
It doesn’t matter if you are a rockstar, game show host, athlete-turned-actor or a hockey player who ended up writing a definitive book. Hard work, consistency, perseverance, innovation and the willingness to challenge the status quo are the fundamentals of what Inukshuk is about.

The world will miss these icons, but lucky for us they left a record of achievements and experiences we can still listen to, watch and learn from.

At Inukshuk Capital Management, we are firm believers in the connection between Health (physical, mental, spiritual) and Wealth.

We have written a lot about ESG (Environmental, Social, Governance) and our belief in investing in companies who embrace and adopt progressive thinking and practices along these lines. This aligns to our core values and our belief that health is wealth.  As we remember lost soldiers who fought for our freedom, we also remember those lost to mental illness.

We will leave you with this thought from Alex Trebek from his memoir:

“Interestingly, the longer I’ve lived with the cancer, the more my definition of toughness has changed. I used to think not crying meant you were tough. Now I think crying means you’re tough. It means you’re strong enough to be honest and vulnerable. It means you’re not pretending. And not pretending, being willing to let your guard down and show people how you truly feel and admit that you’re a wuss, is one of the toughest things a person can do.”